After moments remembering Mike Hall, the Transcontinental Race starts. We are riding a local neutralized round and are delivered at the Muur. It is the first time I climb the Muur. A lot of people are cheering the riders. Some supporters are shouting my name. A few minutes later I pass the top. Is that it? That wasn’t very hard. Into the night we go. I pass some riders and a lot pass me. Most of them are flying. After 20km I decide to ride my own tempo. No problems with my route so far. Accidentally you meet other riders. Meteora is still far away.

That first weekend I struggle a lot. I just can’t find my legs, uphill I seem to go slower than a turtle, my shammy hurts and then the news spreads that Frank Simons passed away after an accident. I met Frank several times at Dutch randonneuring events. Nice guy, friendly. We travelled together in the train on Thursday from Breda to Brussels. We talked about our bikes, routes and tactics. And now I am sitting in silence in the grass along a road in Luxemburg, thinking about him. Ride in peace Frank! The organization decided, after talking with Franks family, that the race will go on.

Late Sunday afternoon I reach Check Point 1. I am mentally and physically broken. Everything in my body hurts. About 580km done of 3800km. My plan was to reach CP1 early Sunday morning. Failed. The thought of scratching the race here keeps buzzing in my head. I am surprised I meet Emily Chappell at CP1. After a small conversation she convinces me to rest for a night in a hotel (I haven’t slept since the start) Smart move. The next morning I am feeling better. 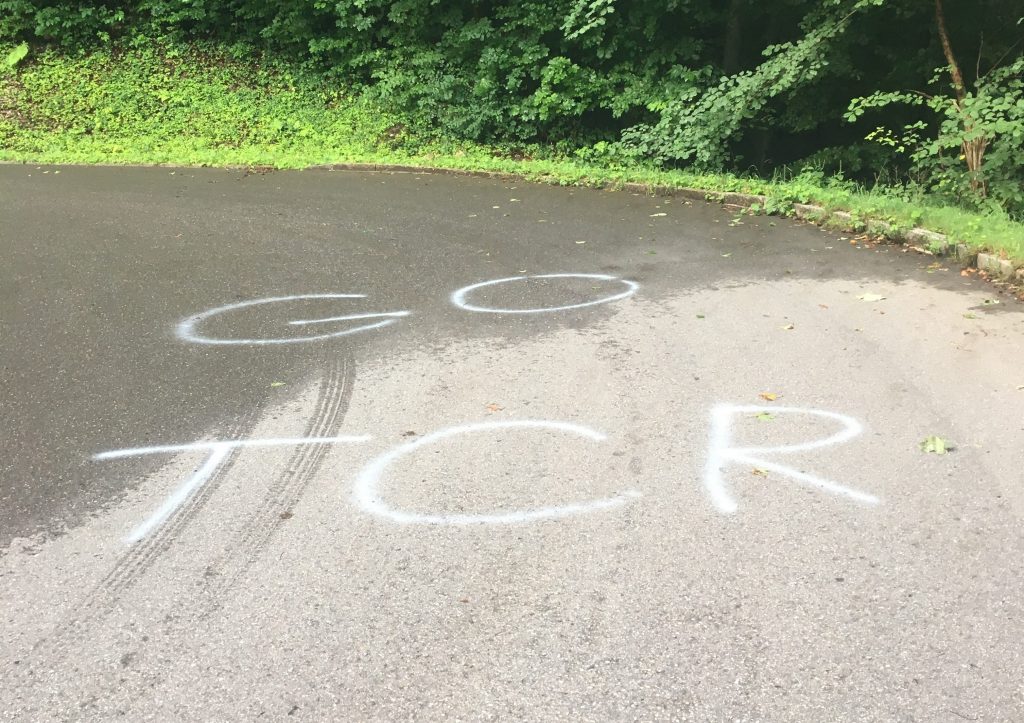 After breakfast I start riding the parcours to Schloss Lichtenstein. Not a very hard climb. Due to heavy rainfall in the night, there are some rocks on the road. Left after water streamed from one side to the other. I take some pictures and decent to continue my route. A few kilometers down the road I meet Paula Regener at a local Lidl. She is having a hard time. We talk and I give her a hug. Hard times will pass.

I am making my way through Germany. A bit boring. Roads go up and down. Every 5km a small village. All those villages look like each other. White houses, a church and some farms. Sometimes I curse Komoot, I used for planning my route, because of the steep climbs. The weather is fine and I am making good progress. Late in the evening I enter Austria. That night I keep cycling and cross the Fernpaß. It should be a beautiful place, but it is dark so I completely miss the views. Bummer. After decending the Fernpaß, I planned a shortcut towards Innsbruck. In the dark of night I stumble upon a path full of rocks and stones. I try to cycle it, but I decide to walk. I remember seeing a photo posted by Shu Pillinger earlier that day. Apparently I made the same error in my route planning. Luckily it is a relative short section, so I made good progress the rest of the night. Early in the morning I reach Innsbruck. Time to have breakfast.

I started my way up the Brenner in a pretty good position. I passed Paula Regener that night and tried to pass Shu Pillinger too. However her dot started moving early that morning from Innsbruck. When I started to climb, Shu already was close to the top of Brenner. My plan for that night partially succeeded. I have had really good legs for a day and a half, but that morning the lack of sleep that night slapped me in the face. I was really struggling to get up the Brenner. It isn’t a pretty hard climb. But being tired and the warm weather didn’t help me much. Somewhere during the climb, I stopped at a parking spot. I tried to sleep a bit, but I just couldn’t sleep either. I got a message from Robert Carlier (a fellow Dutch rider): “You are doing great!” Apparently he was watching my dot somewhere from Check Point 2. I reply to his message: “Thanks. Trying to rest a bit and then make my way up the Brenner.” My head wanted to get to CP 2 fast, but my legs had other plans. 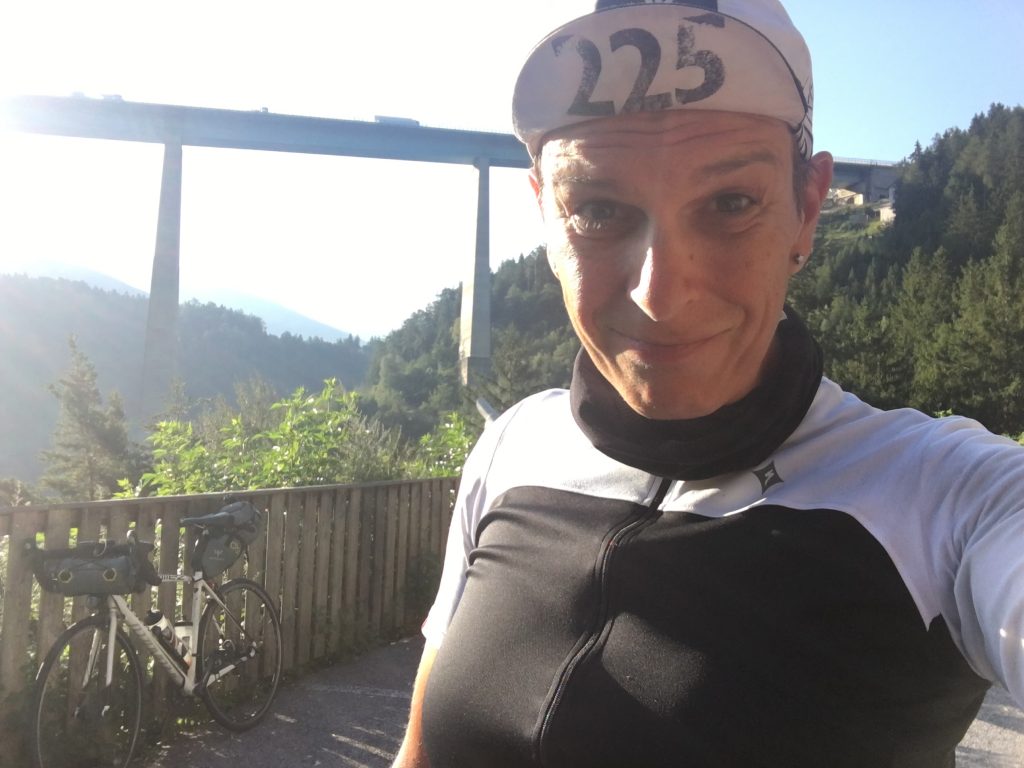 I struggle, a lot. Climbing the Brenner takes much longer than expected. Almost at the top the Southern wind got heavier. I spotted the old marker on top of the Brenner and wanted to take a picture of my bike in front of it. The battery of my iPhone was empty. No photo. When I wanted to continue, my Wahoo ELEMNT was frozen. Oh no! After a few minutes it reboots and, luckily, started resuming my ride. This took a long time. While I was waiting, Paula passed me smiling and waving. I wave back. My plan completely failed. Both Shu and Paula were in front of me. There was one thing that could be in my advantage: a long downhill to Bolzano! I love downhills. But that massive headwind while going downhill. No! That didn’t help me.

I give everything that day. I tried to squeeze all energy out of my legs. Every 10km I checked the dot of Paula and I was glad the gap between us two was getting smaller each time. At some point in the afternoon I pass her before reaching Bolzano. A little feeling of euphoria. Now keep going. In Bolzano I rush into a supermarket to get food and water. After I filled my water bottles, I ate a bag of chips and drank some cola. I get back on my bike and follow my route. For some reason my route isn’t right. I should ride a bike path from Bolzano to Trento, but my route leads me to a major road. I decide to go back. After 10 minutes riding around, I decide to take the major road towards Trento. I just couldn’t find the bike path.

It is early in the evening and I feel I am getting tired. I have been riding for two complete days without much sleep. The road I chose was busy. I stopped a few times to rest in the grass alongside the road. Then I decide to stop for now. I am just too tired, I need sleep and I don’t want to bring myself in danger on those busy Italian roads. About halfway Bolzano and Trento I find a hotel. The owner is of Dutch origin. Funny. I ask him in Dutch if he knows where the bike path to Trento is. He takes me to the road and points to the overside. “Overthere, 200 meters, along those trees”, he says. From my room, I can see the bike path and spot some other riders that evening. Bad luck. After a shower, I wash my shorts and fall asleep pretty fast. 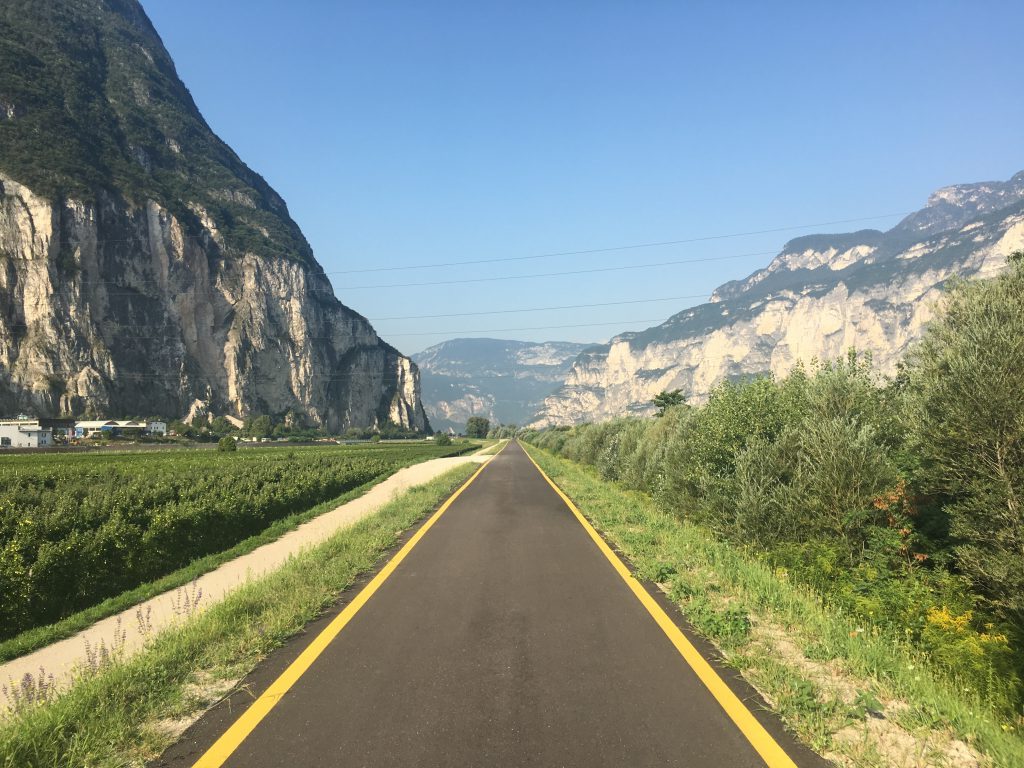 Next morning I follow my route to Trento. It takes me 5 minutes to get back on the bike path. I feel refreshed, my legs are good and I feel happy. It’s a beautiful day to cycle. I reach Trento pretty quick. From there the road goes uphill. At home I had changed my route a bit to avoid banned roads by the race control. Apparently those changes weren’t synced to my Wahoo ELEMNT. I followed my first version, being very careful not to end up the banned road. Luckily I find another bike path. It felt like a highway for bicycles. Two Italian cyclists were cycling my way. One of them applauded and shouted “Bravo! Bravo!” That made me laugh. In a little village further in the valley, a woman spotted me and shouted “Ok, go Greece!” I responded by raising my thumb. Those little acts gave me energy.

Almost at CP 2, I noticed my route was going in the direction of the banned road. At that moment I made a stupid decision. I ignored my route and thought a detour was a better idea. Fool! Normally my sense for direction is pretty good, but now I rode further away from Semonzo. I tried to find my route again on the display of my Wahoo ELEMNT, but it showed something I thought was my route. After 20 minutes I ended on a bridge over a highway. CP 2 was 10km further up the road. Temperature was about 40C at that moment. I emptied one water bottle over my helmet and in my neck. I almost fainted. All day I was feeling good and suddenly I was feeling horrible. I found my route and completed the last 4km very slow. Another rider was coming my way and told me I was almost at CP 2. I remember parking my bike, saying “hi” to the crew and asking for water. I sat on the floor, exhausted. The stamp on my brevet card wasn’t important at that moment. 10 minutes later I was feeling better and got my second stamp. I reached CP 2 about one hour before it closed. 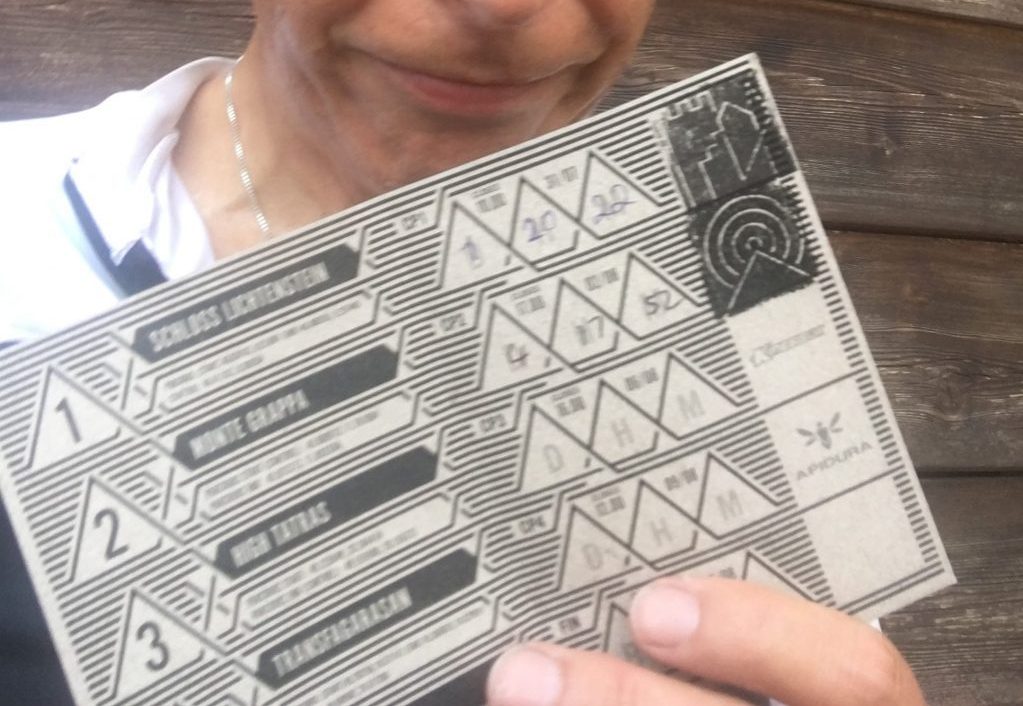