I slept some hours at Check Point 2. It is just past midnight when I prepared my bicycle to continue. It is still very warm. My Wahoo ELEMNT records 28C. Next stop is Monte Grappa. A 19km climb, average gradient 8.1%. On the tracker I see two riders riding in front of me. Would be nice if I could catch up with them. The first part of the climb was going pretty good. A section with a lot of hairpins. Occasionally a car was passing by, but it was a quiet and dark climb. The valley filled with lights, breathtaking view. The second part of the climb was horrible. Steep sections and I didn’t have the right gearing on my bike. That means I had to walk. Early in the morning I reached the top of Monte Grappa. It took me about 6 hours (including some naps). 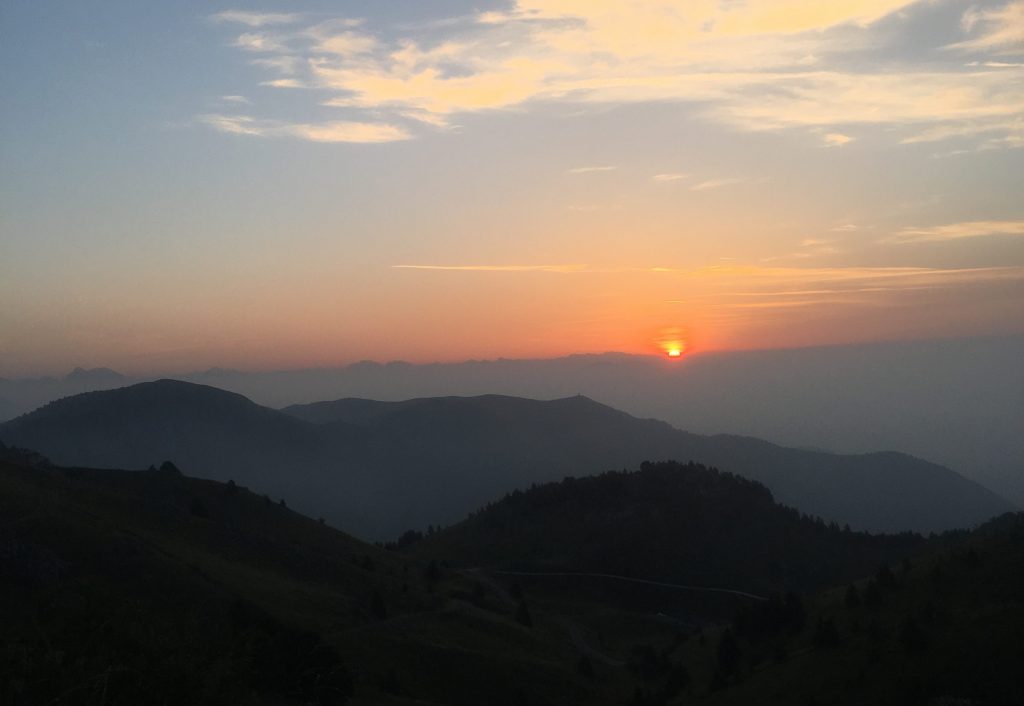 After 15 minutes I noticed someone riding up the mountain. The rider came closer and I recognized it was Rishi Fox. Good to see her up there! Unfortunately the restaurant was closed. I really was in need of coffee and my water bottles were almost empty. A long descent brought me in a little village where I spotted a waterpoint to fill my bottles. Now find coffee somewhere. Not an easy task at 7:00 o’clock in the morning. A few kilometers along the road I spotted a little supermarket. Bought me some juice and fruit and considered it my breakfast. While 200 meters further there was a little bar. I bought me a delicious Latte Macchiato. In fact it was so delicious I asked the coffee lady for another one.

That morning was going pretty good. My legs were ok, I had a slight tailwind and the roads were almost flat. I stopped at some gas stations to get me cool drinks and ice. Temperatures were rising fast. On Twitter someone told that authorities advised not to go outside and not to be active due to the heath. Sorry guys, I am doing epic stuff, no time for that right now. Early in the afternoon a blue car with an Italian couple was riding along with me. “Are you Chantale?”, the guy asked with a heavy Italian accent. It was a pleasant surprise some dotwatchers were catching up. They asked if I had enough water with me and offered me a cold bottle. I kindly declined their offer: “Against the rules, sorry!” A few kilometers later I passed a fastfood restaurant. It must have been about 38C that afternoon. This was a perfect place to enjoy a well deserved “lunch” and the air conditioning. About 30 minutes later I continued my route.

In the evening I was pretty tired. I decided to do a little detour and try to get a cheap hotelroom. After a night good sleep I was back on the road again. I found me some coffee and croissants at a little bar. While sitting outside some other riders passed me. I didn’t know them, but recognized their caps and loaded bikes. That day I cycled a beautiful bicycle path from Italy into Austria. An old train track converted to a bicycle path. Not too hard and lots of tunnels which were pretty cold. Moments of joy on such hot days. Early in the evening I stopped for “dinner”. More junkfood. I cycled all night through Austria, while seeing thunderstorms on the other side of a mountain ridge. Two days later I learned those flooded a village. 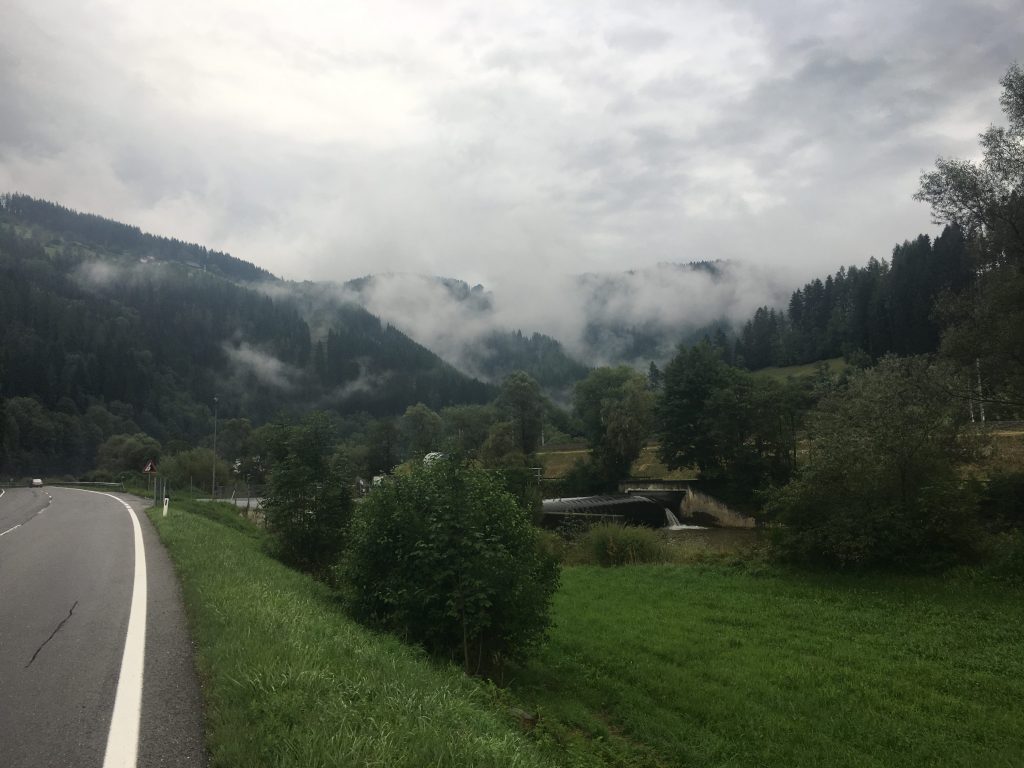 I made may way through Austria the next days. It was a constant struggle between keep cycling and finding a hotel. Eventually I tried to keep a schedule of cycling one night and the next night take a hotel to get some sleep. After passing the town of Zeltweg, it was mostly downhill. On the flat part of Austria I got some rain and wind. Felt like home in the Netherlands. My mood was good. I was really enjoying riding my bicycle. About 10:00pm I reached Bratislava, Slovakia. I found a cheap hotelroom and enjoyed another good night in a decent bed. After breakfast back on the bike. You are getting used to the drill: ride, eat, sleep, repeat.

I made my way through Slovakia. Cycling in the night was pretty cold. I cycled a horrible road with lots of trucks passing me. Near the place Martin, I found a gas station which was open for 24 hours a day. I enjoyed some coffee and some food. I continued my way, but had a really cold wind. I stopped at a bus stop where I could shelter for the wind. A few minutes later a police car stopped in front of me. They opened their window and started talking to me. I didn’t understand them. Luckily they could speak English. I told them I was doing a bicycle race and was on my way to Poprad. They responded surprised. “That is a long way! About 120 kilometer”, one of them responded. They left, but 10 minutes later they came back. One of them waved to me. I walked to their car. “Come sit with us”, he told me, “It is cold outside, we have warm car”. How generous! While they discussed an abandoned vehicle down the road, I enjoyed the moment. After 10 minutes they had to go. I gave them a kind pat on the shoulder, “Thanks guys!”.

I cycled into the daylight. I was feeling good. During the day I had some climbs. Legs were okay, but I was getting tired. When you are tired, you make stupid decisions. Somewhere I decided to ignore my route. My feeling told me I was doing a detour and thought I knew a shortcut. Well that didn’t work out really well. I ended up somewhere where the road stopped. I kept going, stubborn as I am. Minutes later I was walking with my bike through grass, with a height of 30cm. The famous road to nowhere. I followed the way back and about 2 hours later I recognized where I was. I did this part of my route earlier that day. “Keep following the route, moron!”, I told myself. This was becoming a horrible day. In the afternoon, I stopped and parked my bike against a tree and sat in the grass crying. For 20 minutes thoughts crossed my mind to scratch this race. A little voice inside asked me, “And then what? Walking home?” 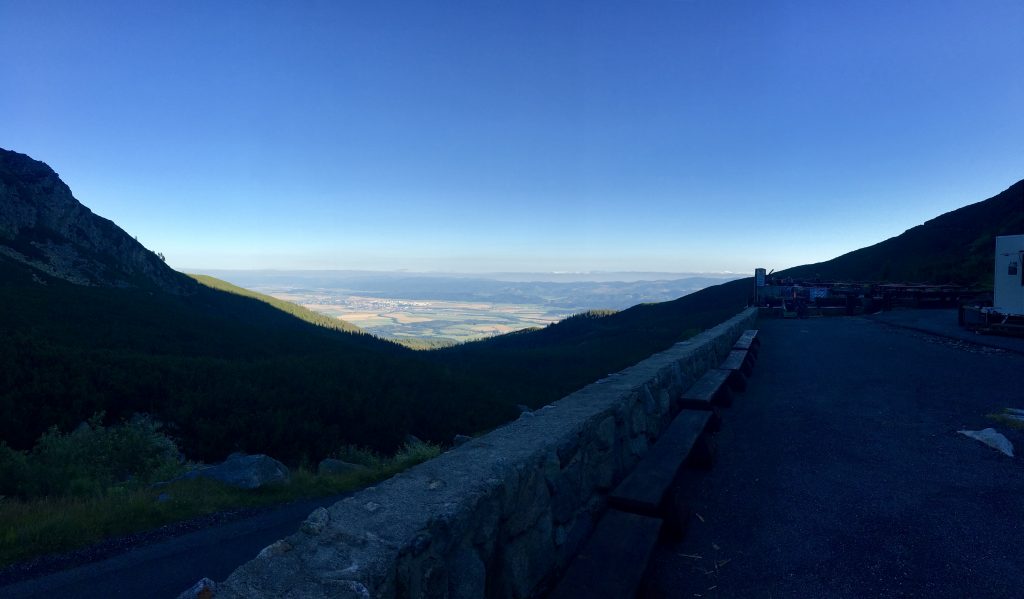 Tears were gone, I had some rest. Badass Chantal was back. A few kilometers later the road went downhill. I was flying. I reached the climb to CP 3. What a beast! “Thanks Mike!”, I whispered, “You must watch and muwhahahaha now.” I kept going, it wasn’t far anymore. The road surface became really bad. Then it suddenly wasn’t steep anymore, the road flattened and the hotel I knew from pictures was in front of me. I reached CP 3 a day late. Angela and Julie were just packing their bikes to go down.