After getting a stamp on my brevet card and some coffee, I went down the CP 3 parcours again. Horrible road surface. Reaching the main road, it was full speed. Long way down towards Poprad. I passed Julie and Angela. After a long day, where I completely screwed my route and got lost, I was looking for a good place to sleep. I found a hotel pretty soon. As I walked in the bathroom to take a shower, I got a really nice surprise: my room had a bath! I hurried down and got me a bottle of beer. Sitting in a bathtub with beer. I felt like a queen.

Early in the morning I packed my stuff and left before breakfast. I dropped the key of my room in the mailbox. Just before leaving Poprad, I passed a gasstation. First “breakfast”. Coffee and some 7Dayz croissants. The temperature was nice and I made good progress that day. Until my left shoe kept unclipping itself. My cleats were almost roasted. I took a little detour in Košice and found a bike shop, which was also a Specialized dealer. Luckily they had one pair of Shimano cleats on stock. I changed my cleats, borrowed a floor pump to get my tires back on pressure and got back on my bike fully motivated. 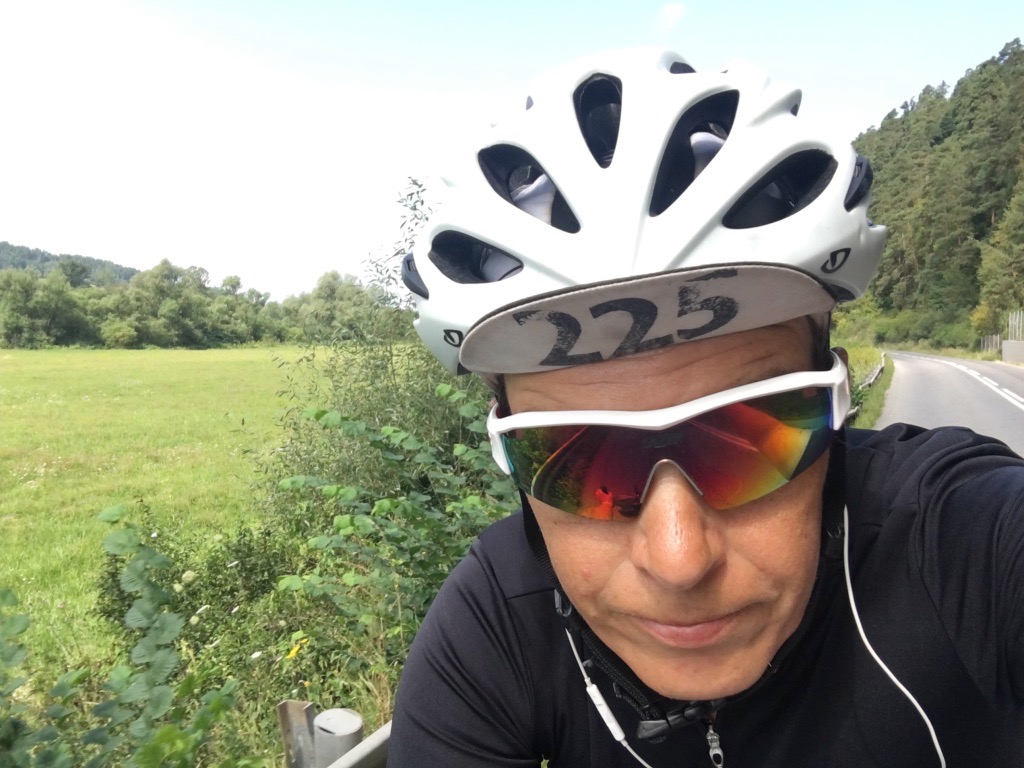 After finding my route again it was going pretty good. It was very warm with temperatures around 38C, but trying to keep a “diet” of ice cream and cola made it bearable. Late in the afternoon, when I was close to the border with Hungary, I had my first encounter with the “angry dogs” I read so much about. I was cycling a little climb through a village, when two Jack Russels ran beside me. They looked pretty nice, but one started to bark and tried to bite in my shoe. I unclipped my right shoe and tried to kick in its direction. The dog was gone. Some kilometers later I reached the border.

I descended into Hungary and after the first houses there was a beautiful bike path. We are spoiled in the Netherlands with good bicycle paths, but this one was just as good as our Dutch paths. Further down the road there were even more. Those Hungarians take it seriously. The night fell and I decided to just keep going. I made my way through Hungary quickly that night. Early in the morning I crossed the border with Romania. First border crossing where I needed to show my passport. “Where are you going?“, the border patrol asked. “Transfăgărășan“, I replied, “and then to Bulgaria“. He looked surprised. “That is far away. Have a nice day!“, he said. I cycled into Romania. The first thing I noticed that the roads are straight and long. Lots of abandoned factories.

In the first bigger town, Carei, I spotted a pharmacy. I was out of paracetamol. A nice woman gave me package and I wanted to use my bankcard to pay. First world problems. They don’t accept bankcards everywhere. I didn’t have Romanian money either (they don’t pay with Euros yet), so I asked her if there was an ATM in the neighbourhood. Her reply surprised me: “Take it. You come with bicycle, so we are friends.” I was literally falling in love. I smiled from ear to ear. They only thing I could say was some sort of “Awwwww thank you” while looking flirty in her direction. Those little acts of kindness can make your day.

Late in the evening I reached Cluj-Napoca, a pretty big city. Lots of people on the streets. Apparently a soccer match just finished in a nearby stadium. In the center I stopped at a McDonalds. Refilled my water bottles, ate horrible junkfood and left the city. I thought it was just too busy for me. Must be the lack of sleep. After a climb out of the city I stopped under a giant billboard, which was visible from down in the city. I was tired. Needed some sleep. At a distance of about 50 meters there were some bushes. I got my sleeping bag and fell asleep. 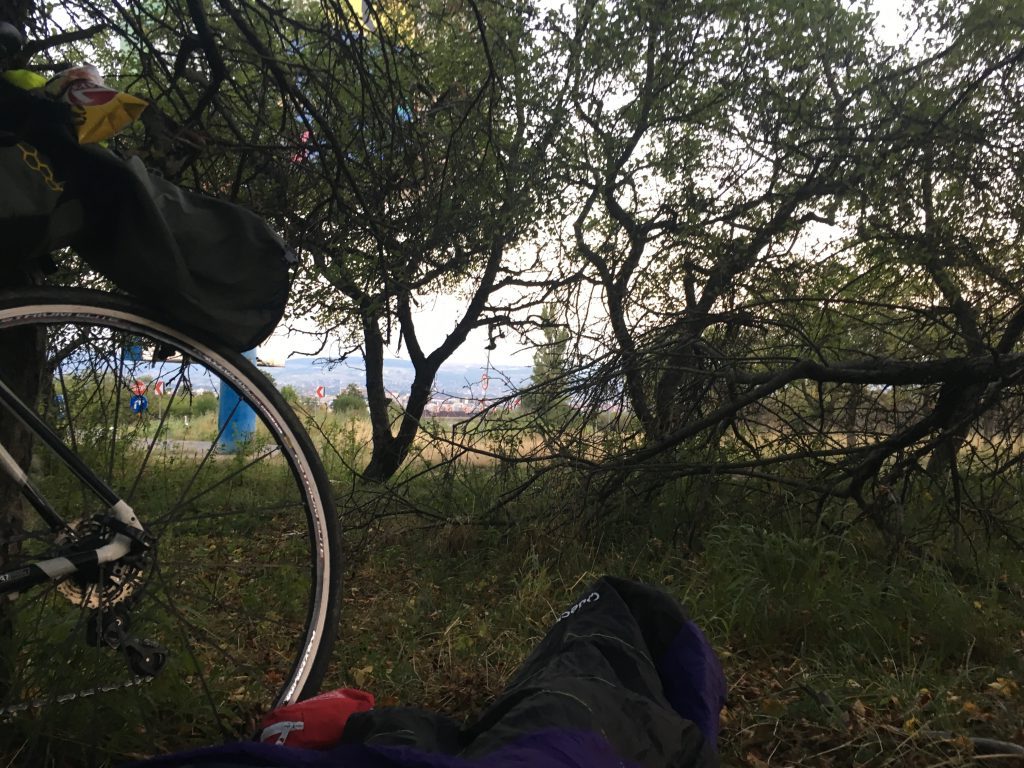 Next morning I got up early. After a few minutes I passed another gasstation. You are getting used to the way of life. Buying all available sorts of 7Dayz croissants, drinking your morning coffee out of a little plastic mug, filling your water bottles and back on your bike again. My legs were ok, some parts a little tailwind helped me. In the afternoon the Transfăgărășan mountains doomed up on the horizon. Getting close to CP 4. Occasionally you pass a shepherd with his sheep and dogs. Some wave to you, others don’t but the dogs run towards you. While I was really close to the CP 4 parcours, I passed a little village. A boy was riding his bike and rode a few minutes besides me, without saying anything. It distracted me a bit and got of my route and eventually ended up in a field. I wasn’t alone. Two dogs were barking on a chain. What are they doing here?

I continued my way through the field. My route was on the other side. I had to walk and overcome some bushes. Back on my route. I looked around. There was no descent road or path. Just a little stretch of sand. According to Komoot “suitable” for bicycles. Are you kidding me? Anyway a little later I had to cross a bridge. I have seen a lot of bridges in my life, but this one was the most scary one. And also the most funny. I slowly cycled to the other side. The bridge was moving below my weight. That moment when you reach the other side felt like “yay! I am still alive.”

I turned onto a bigger road. Cars and trucks passing me. Didn’t see that many traffic all day. Just before I had to turn left towards the CP 4 parcours, there was a large gasstation. I didn’t have any dinner yet, so I bought a bag of salted chips, a can Heineken beer and more 7Dayz croissants. After about an hour I hopped back on my bike. Ready to kill the climb in front of me. Unfortunately it got dark pretty quick. It didn’t see anything of the climb. Just some light back in the valley. The wind got really hard. Some parts I had to walk because of the massive headwind, until I got to another hairpin where I got tailwind again. I worked my way to the top that way. According to the tracker, Cesare, on his fixie, had to be just in front of me. Unfortunately I didn’t see him. With the battery of my ELEMNT low, my iPhone and power banks drained, I reached the top of Transfăgărășan. After I tried to find a wall outlet, I decided to stay the night. I got my sleeping bag and tried to sleep beside one of the buildings, trying to shelter for the cold wind.