Early in the morning. The sky slowly turned blue again. I get out of my sleeping bag and start to pack my stuff. It was cold night. I was in need of coffee. I noticed a building wat looked like a hotel or a restaurant and walked towards it. It was closed. A woman was also wandering around it. I told her I was looking for coffee and a place where I could charge my iPhone. “Are you riding the Transcontinental Race?“, she asked. “Yes I am“, I replied with a smile on my face. It appeared she and her partner were cyclists too and she tried to follow the race. She offered me her power bank and I charged my iPhone for a few percent. Enough to take a photo on top of Transfăgărășan as proof I have been there (I totally forgot my ride was tracked by a spot tracker), I took a selfie together with her. Moments later I got back to my bike and start riding again. I didn’t get much of the climb up there, but as soon as I came out of the tunnel a beautiful scenery was unfolded in front of me.

After a long beautiful descend I reached the end of the CP4 parcours. A few kilometers down the road finally a restaurant. I parked my bike and asked the waitress if it was possible to have breakfast. No problem, so I took a table and they served me croissants, juice and coffee. I must have been eating as a homeless person in a five star restaurant. Meanwhile charging the battery of my iPhone to a more comfortable level.

An hour later I jumped on my bike again. Some other riders were close in front of me. I wanted to see if I could pass them. A long road down, not a real tailwind but the angle was enough to make it a bit easier to get speed out of the pedals. I completely enjoyed the moment. Didn’t care it was another day with temperatures above 35C. While the others were following the road directly to the south, my route was going a bit to the southeast. A pretty steep climb followed. I made my way up slowly. Eventually I ended up at a major road with a pretty large gas station. I decided to get some food and refill my water bottles. I ate a fresh sandwich. Shouldn’t have done that.

An hour after I left the gas station, I was lying in the grass feeling ill. The sandwich I ate earlier found the wrong exit out of my body. I tried to continue, but 2km down the road I stopped in a little village and found a spot in the shadow. Apparently it didn’t look good. A woman with her kids came towards me and asked if everything was ok. I pointed at my water bottles. On the overside of the road there seemed a sort of pump with ice cold water. They refilled my bottles and I kept drinking. When they left, I slowly walked to the other side of the road again and refilled my bottles again and kept drinking. After a while I felt a bit better. I got back on my bike and started cycling slowly.

Quickly I felt a lot better and found my pace again. It started to get dark and after a while I met a Romanian cyclist. He told me the weather would be horrible this night and convinced me to take a hotel in the next major town, which was 20km down the road. Didn’t plan to take a night in a hotel, but since I lost a lot of time and wouldn’t make it on time for the ferry to Bulgaria, I decided to call it a day. Took a shower, charged my power banks, Wahoo and iPhone. Early in the morning I hit the road again. I was done with Romania. Luckily I had a real good tailwind, I was flying towards the ferry across Danube. 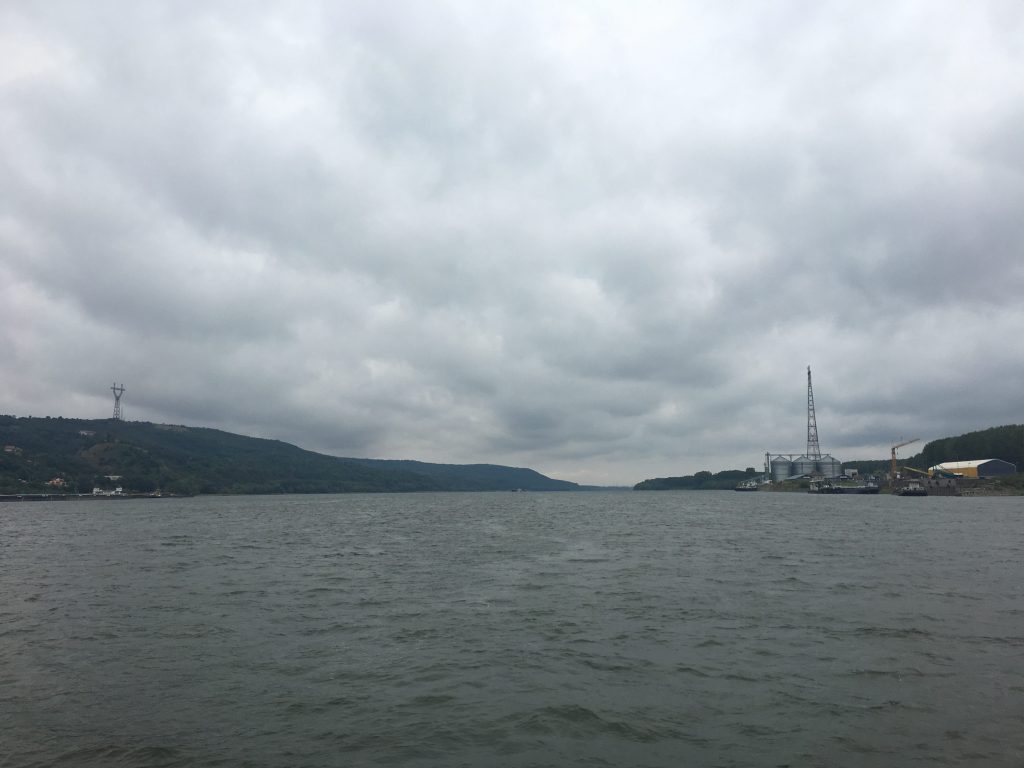 When the ferry arrived at the other side of the river, it was raining. Not a pleasant welcome in Bulgaria. Luckily it didn’t last long. About 15 minutes later it stopped raining and the road dried quickly. That day everything was going fine. I loved the quality of the roads in Bulgaria. Better than Romania. Early in the evening I reached Vratsa and left my route to find a restaurant to have dinner in the city. I decided to keep cycling that night. After I left Vratsa and picked up my route again, I noticed that the batteries of my Spot tracker were low. Eventually I found a gas station and replaced the batteries. There are a lot of stray dogs in the east of Europe and at that moment I bumped into the most adorable dogs. Two puppies approached me and I enjoyed some minutes hugging one of them. 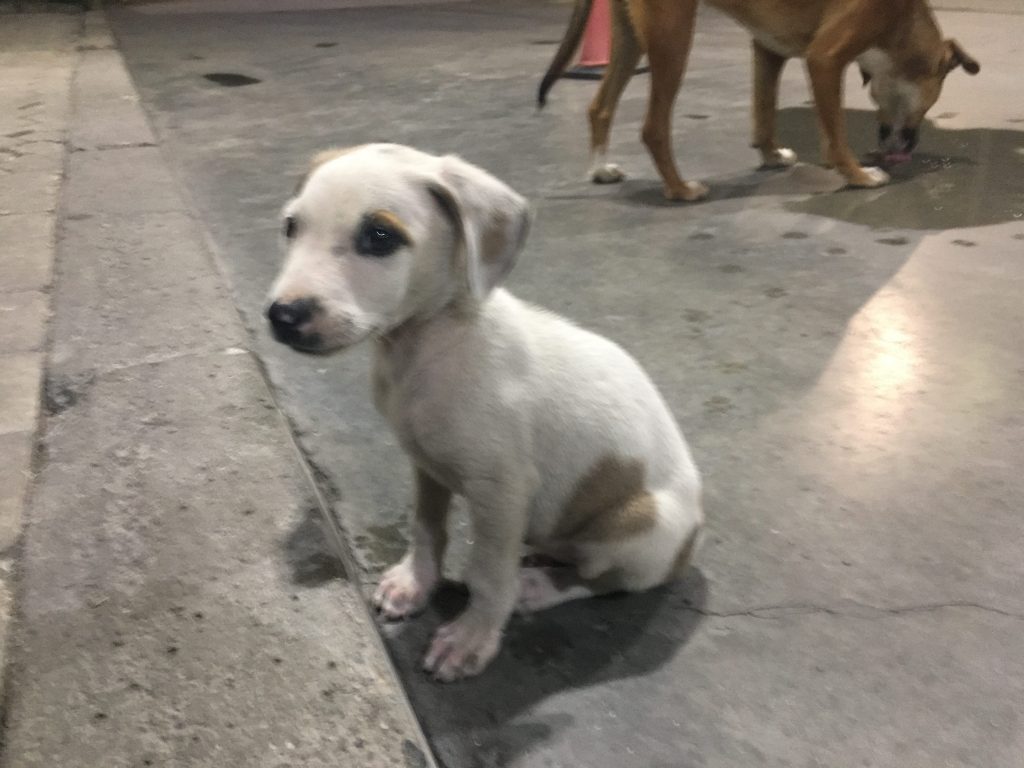 In the morning I reached Sofia and did a quick stop at a McDonald’s for a brunch. I didn’t want to keep hanging around for long, so 30 minutes later I was back on the bike again. Leaving Sofia behind me. I noticed I was close to the pair Abigail & Duncan (caps 251) and eventually we bumped into each other. We had a little conversation and continued cycling. That afternoon we continually keep passing each other. When they stopped I passed them, when I stopped they past me. Just before it got dark I passed the border with Macedonia. I tried to keep pushing, but after 2 complete days and a night I was really tired again. I found a place to sleep. Got my sleeping bag and felt asleep in the grass 25 meters from the road.

I woke up early, packed my stuff and got on my bike again with a sleepy head. I am used to wake up with coffee, but where do you find coffee in the middle of nowhere? Two hours later I finally passed a gas station. What a relief. As the temperature was rising fast, I made my way to the border with Greece. Just after the border crossing I sat down in the shadow and found a WiFi network. I was reading all replies on my post on social media and those were so wonderful it made my cry. There you are, sitting under a tree in Greece, crying like a little girl. About 250km to go.

I love greek food and got hungry. I decided to find me a place where I could eat gyros. No luck. The first village I passed was silent, the second village looked exactly the same. While I was approaching the third village I told myself I am going to find a place to eat. I noticed a old greek man standing in his garden. I cycled towards the gate and tried to start a conversation in English. One of his daughters came towards me, she could speak English and she asked me who I am, what I was doing, where I was going. I told her about the Transcontinental Race and was really surprised she invited me to come eat at her parents house. It appeared a greek national holiday where they honour the holy Maria and families get together and eat. They were honoured I was their guest. They gave me delicious food, beer and water. What a blessing! 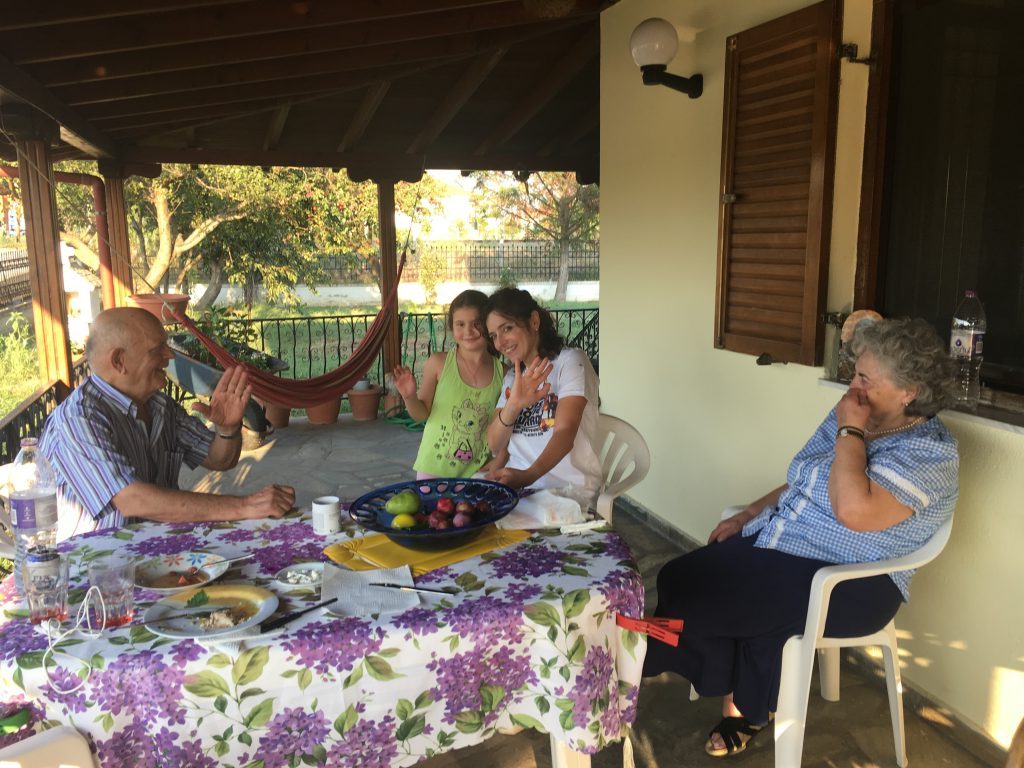 Two hours later I continued my route. A lot of gravel roads. Tried to sleep for a few moments in a field, but the mosquitoes were bugging me. I kept going through the night. I just wanted to finish real quick. But those last hurdles are the toughest. The next day I had to climb a horrible long steep climb. The lack of gears broke me. Again those mosquitoes. Complete armies buzzing around your head. It drove me insane. I dropped my bike on the ground and was “dancing” and shouting on the road to leave me alone. Passing the top of the climb they were gone. If you go fast enough, they can’t chase you (same applies to angry dogs by the way). After a long downhill I finally was feeling getting closer to Meteora. Until I noticed a fence across the road with a big STOP sign. About 15 meters behind the fence somebody was talking to me in Greek. The man switched to English and told I was not allowed to get closer and had to turn around. It appeared to be a military installation. Greece was throwing me curveballs.

I cycled back and and asked some young men what to do. They told me to follow the major road to Kozani. Time for plan B. Detour to Kozani and then quickly find my route again. On my way to Kozani I passed a little bus stop while it was getting dark. I decided to rest on the bench for a few moments. Early in the morning I woke up. I slept a bit longer than planned. About 7:30am I reached Kozani and spotted a Lidl supermarket. I had to wait 30 minutes before they opened. I waited, got myself food and had breakfast sitting on the ground. That day I tried to enjoy, but I had the feeling I was going slow as turtle. 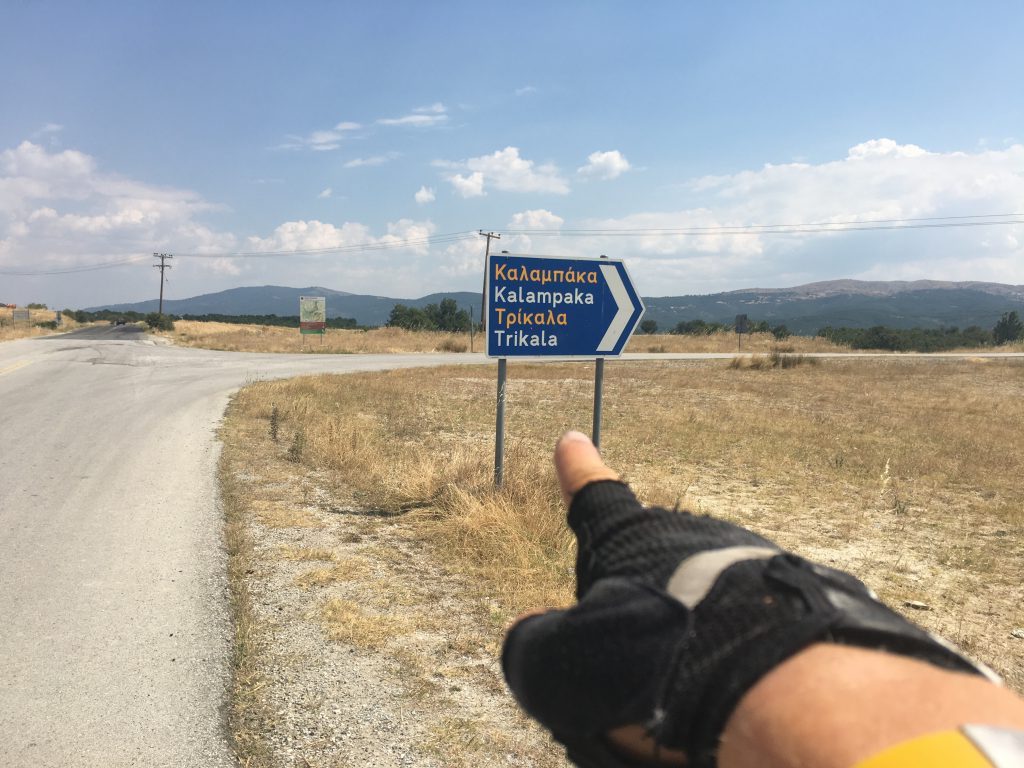 And then out of nowhere a sign along the road: Kalampaka! It gave me a boost of energy. According to my ELEMNT is was about 35km. I quickly calculated in my mind: 20 km to go, final climb 10km, Meteora, beer! Those first kilometers were flying. Long downhill until my route turned to the left. Final climb. Final “muwhahahaha” by Mike. Final mosquitoes. The road flattened. A couple in a car were taking pictures of me and cheering: “Go Chantal!” Still no sign of Meteora. The road kept going down. And suddenly it was like a curtain was opened in front of me. There they are. Breathtaking! I stopped and took some pictures and followed my route. I checked my ELEMNT: 900 meters. Those were the longest 900 meters I have ever cycled. They seem to take hours. Finally after almost 20 days I ride my bike onto the parking of the hotel. I spot Cesare and ride towards him. In tears I gave him a hug. I couldn’t stop crying. I just finished a ride I never thought I would finish.

Thanks to all the people who supported me. Your support kept motivating me, kept me going through difficult moments. Thank you!

I would like to dedicate “The Story of Cap 225” to Juliana Buhring and Emily Chappell. You both have inspired me to get my bicycle and go an ride long distances. Love you both!